Qatar Airways is the world’s fastest growing airline and aims to offer “an unrivalled level of service” from their home and hub. With an aspiration like that, it was an active choice to use Qatar for my return business class trip which flew from BHX to Qatar to KL and back, with a view to experiencing their airline and seeing if they could back up their claim of a service that’s in a league of its own.

They’ve seen an ongoing increased demand from Birmingham Airport, having flown over 400,000 passengers from there over the past 3 years. Having to fly 4 legs of 7 hour flights each – that’s a staggering 28 hours of flying with at least 2 red eyes – I was quietly hoping the hype surrounding their excellence would make the journey easier. Thankfully, I was not disappointed.

I had booked on the Qatar Airways website directly, so this was a simple process with a booking confirmation coming through almost immediately, as expected. At BHX, the business class queue was almost non-existent, whereas in Qatar and KL there were more passengers awaiting business class check in. There’s a world of difference between the BHX business lounge and the one in Qatar, which looks like it could be the interior of a futuristic spaceship. With plenty of open space, a large fountain and several areas to rest and where food is served, I wouldn’t be surprised if it won awards for its design which is not just functional but stylish too. This was by far the best business lounge I have been in and I have been in several. Given the price difference, I am a believer that business class should be just that – a separate class of service altogether catering for business travel – and Qatar’s mission control-like space pod did not disappoint.

On boarding the plane, the first thing that greets me is a smiling cabin crew member in the now recognizable plum Qatar Airways uniform. At my Business Class seat, there was a comfortable blanket and pair of headphones waiting for me. One of the first things that struck me was the large size of the screen (17 inches), ensuring all viewing on board would be a pleasure. 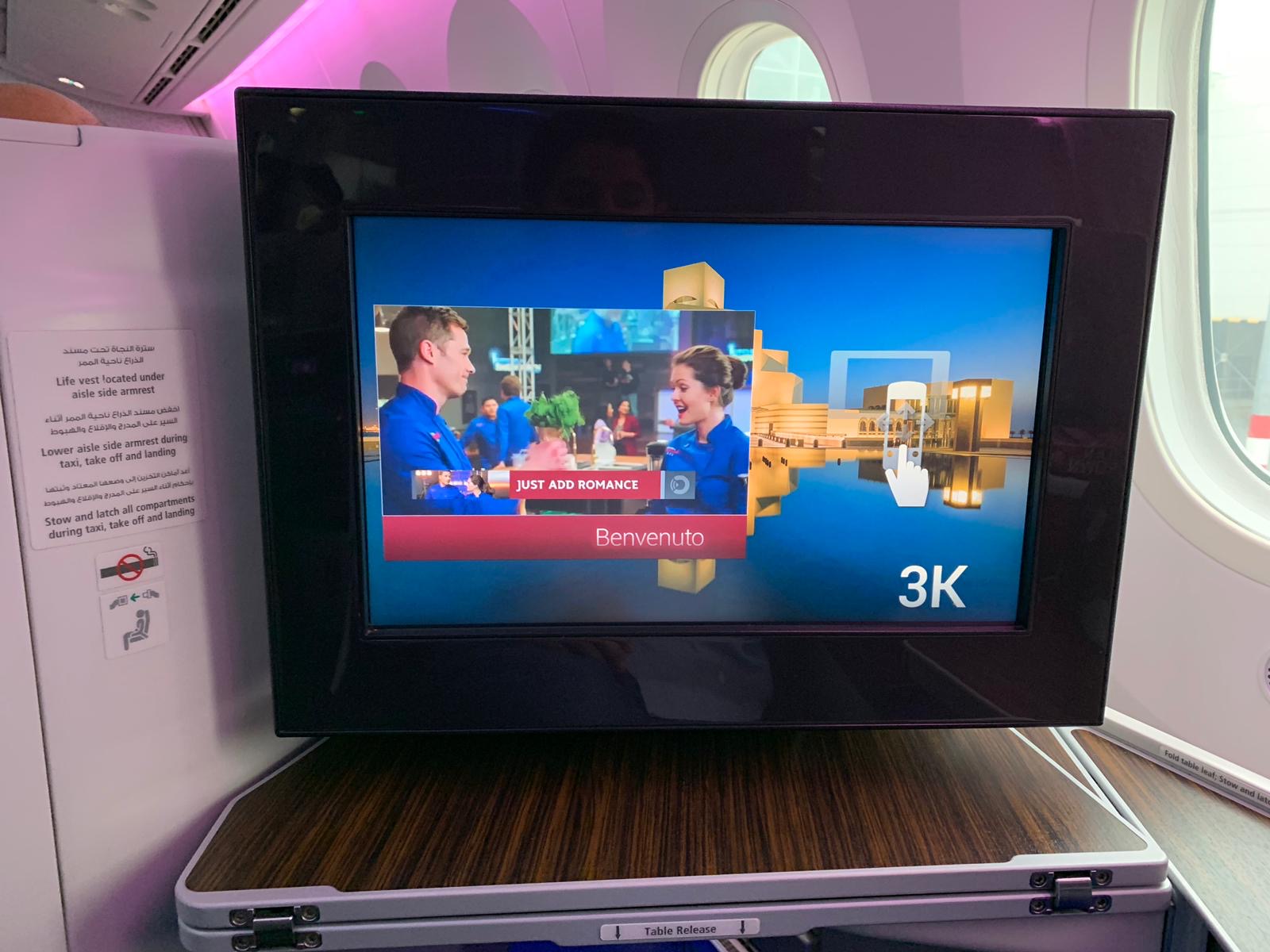 Once of the first things I am keen to do when settling into my seat is to test the bed. I am 6 feet tall and understand not every space is designed for my height, but if it’s going to be an uncomfortable journey, I like to see my options before it begins. The bed was great, similar to the ones on Emirates flights and large enough to ensure my feet stayed on the bed as opposed to poke out the bottom of it. I think anyone taller than 6’2 would struggle though.

Drinks were served before take-off and food was available to me whenever I wanted it. I knew what I would be eating as I had ordered the food 24 hours earlier online at the Qatar Airways website which was very handy and when served, it was as hot as expected and tasted good. 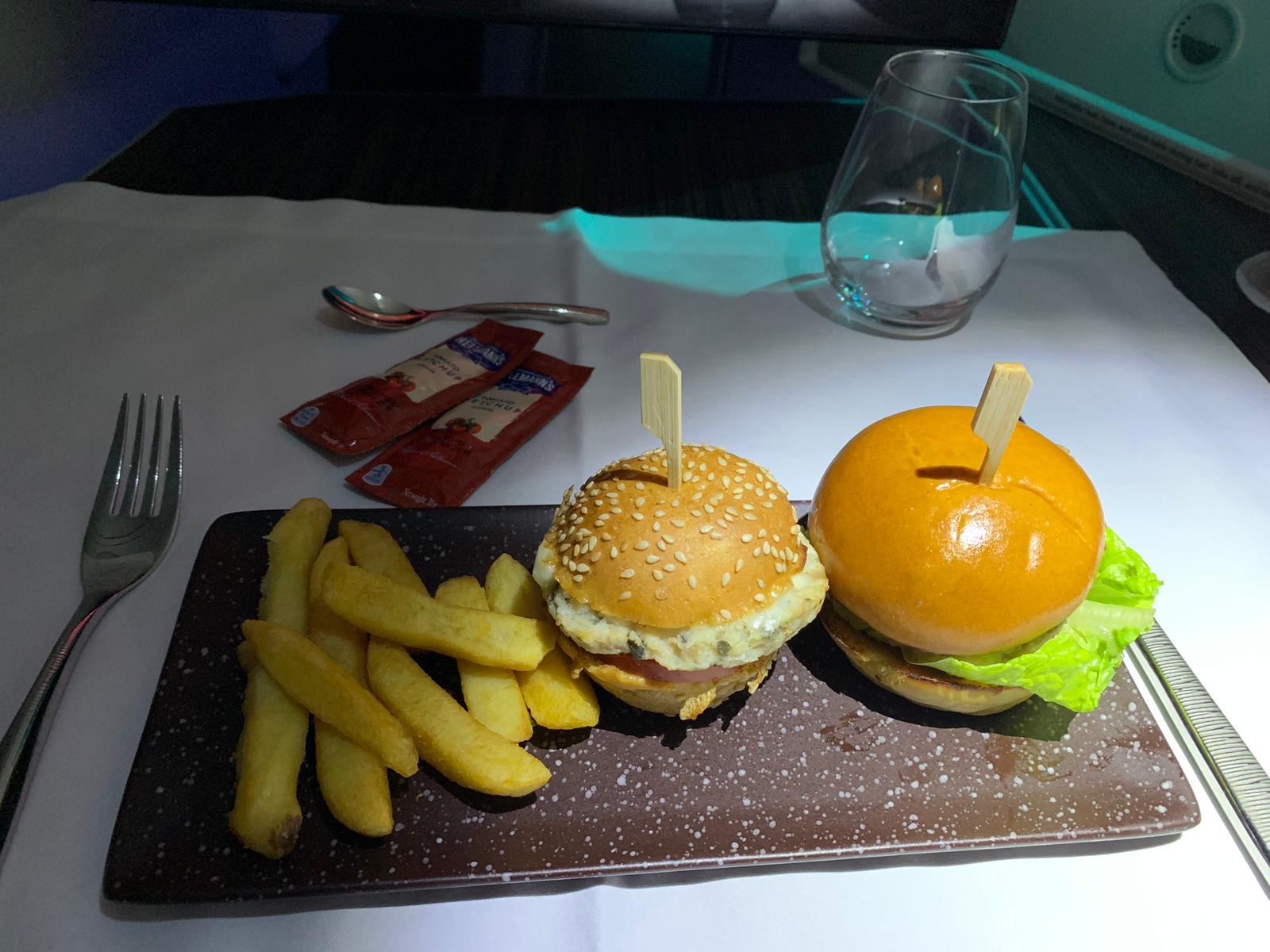 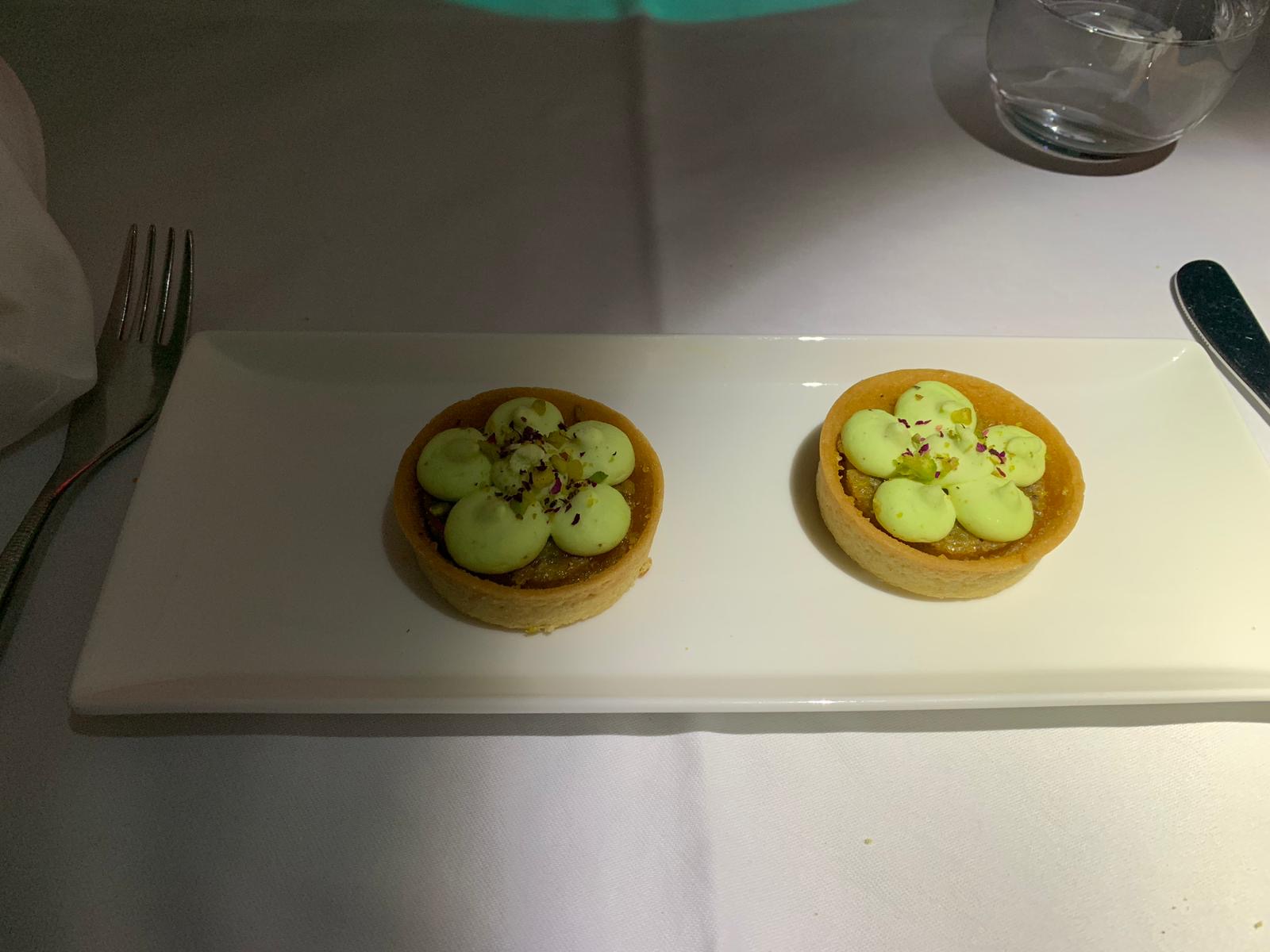 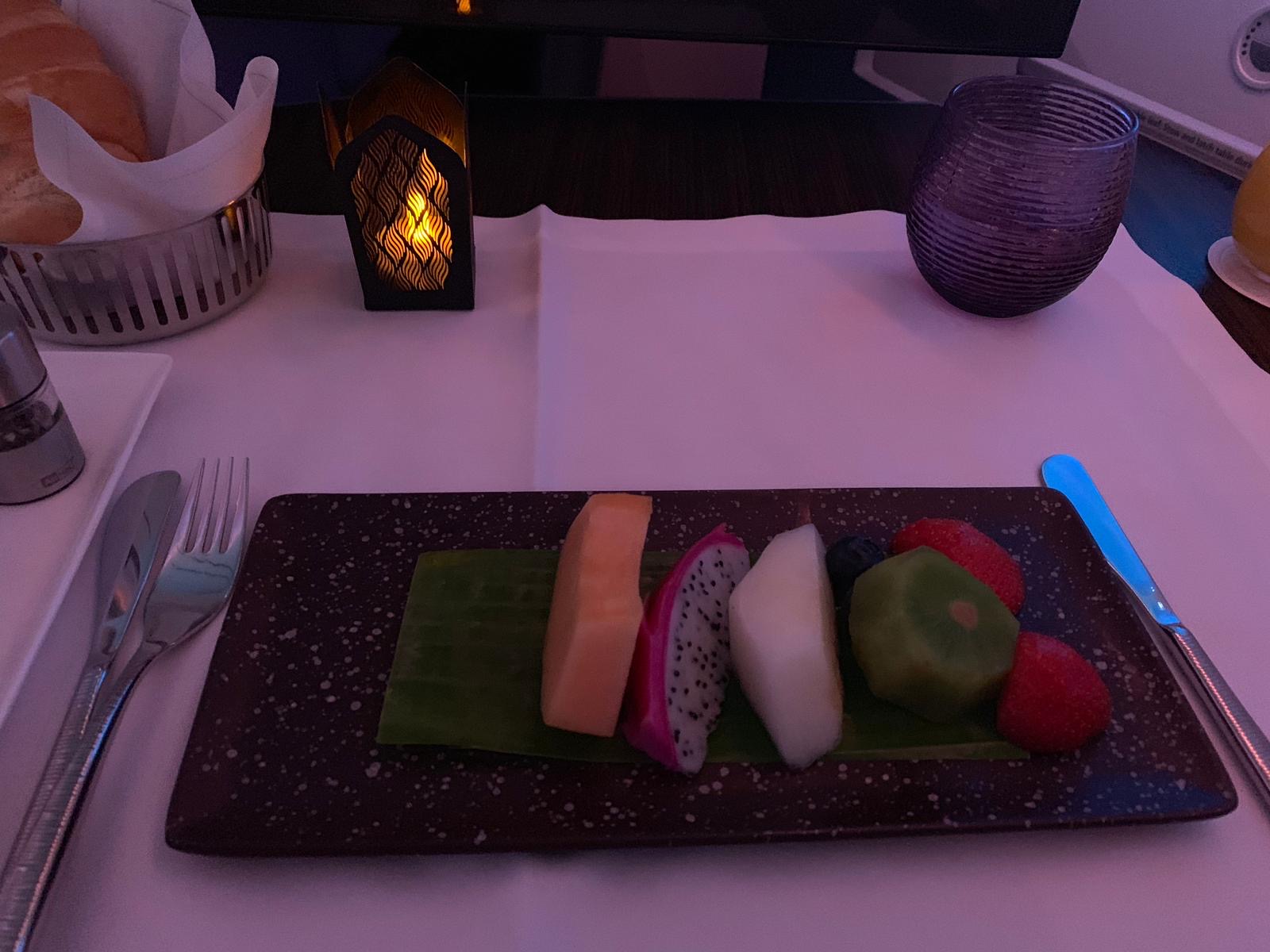 Food presentation was always eye-pleasing and as expected in Business Class, you get real cutlery and glass. As well as a Diet Coke (which isn’t always available on all airlines), I had a very nice hot chocolate which at 39,000 feet tasted delicious. I don’t know if it was the cabin pressure, the atmosphere or the gentle aroma rising from the cup, but somehow it tasted just perfect. 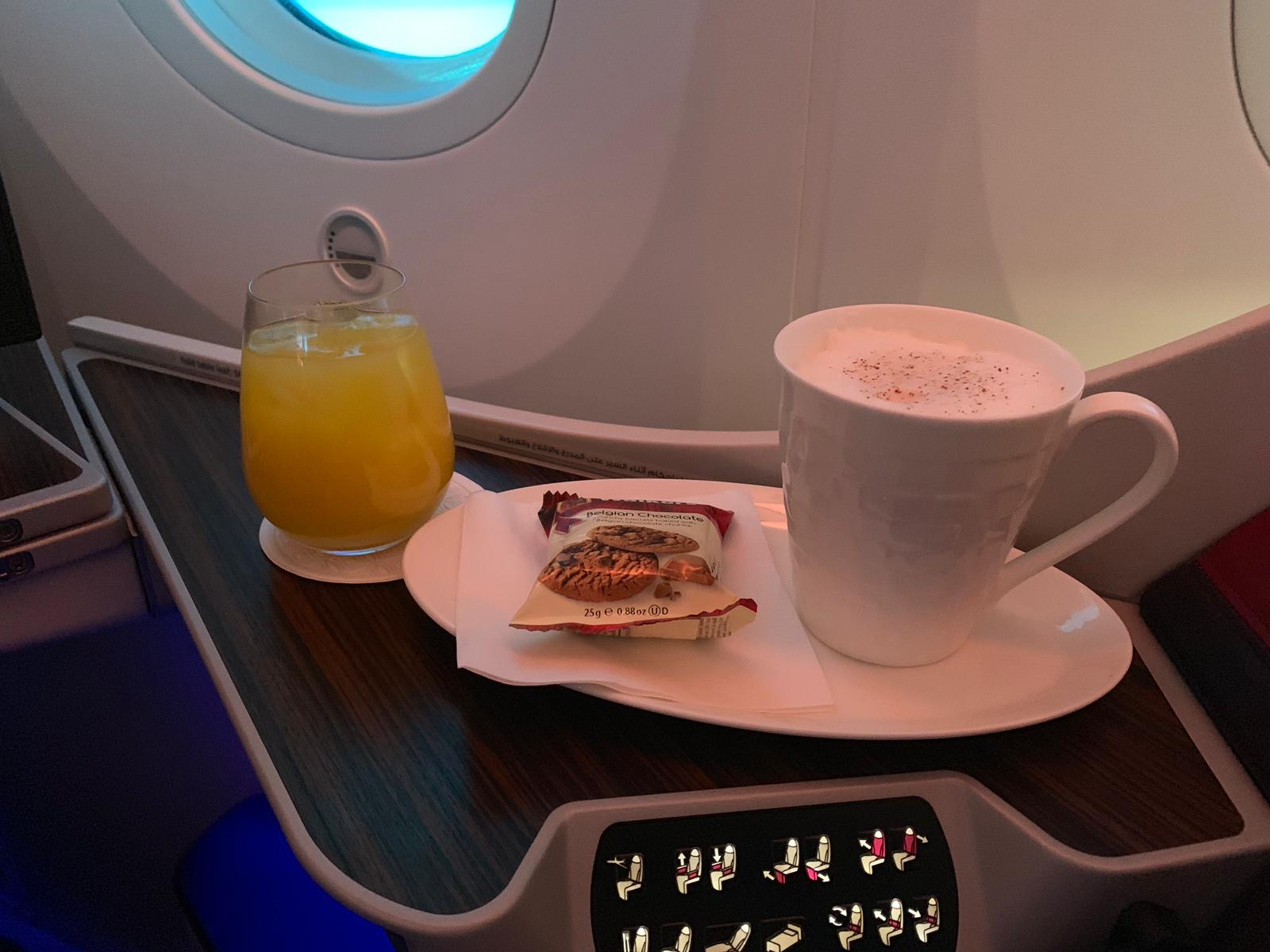 With a wet towel service on boarding, before and after meals as well as before landing, the Qatar Airways staff were always on hand to ensure you feel your freshest, which is a good thing as it meant I could make the most of the service. There is a lot to note about the attention to details Qatar Airways makes. After eating, cabin crew came to Business Class passengers and gave us pyjamas made by The White Company. I slipped them on and found them comfortable, so coupled with the cosy blanket and roomy bed, it was no surprise I was counting sheep within minutes. As this was going to be a long journey and a work trip, I needed to arrive refreshed so finding it easy to sleep was a welcome unexpected luxury.

In-flight entertainment included movies, TV shows and games of a wide variety. Whether you’re after a cinematic blockbuster, classic 80s comedy, Bollywood, box sets or even Arabic cinema, the selection was superb. Audio included the latest chartbusters, a wide selection of Middle Eastern music and even the Holy Qur’an which was a welcome addition. There were also destination playlists with artists from those region sequenced to give you a taste of that part of the world so you could hear a Dublin playlist, Australia playlist, London playlist as well as others. In all honesty, nothing compared with a good book though, but it’s always great to have options. 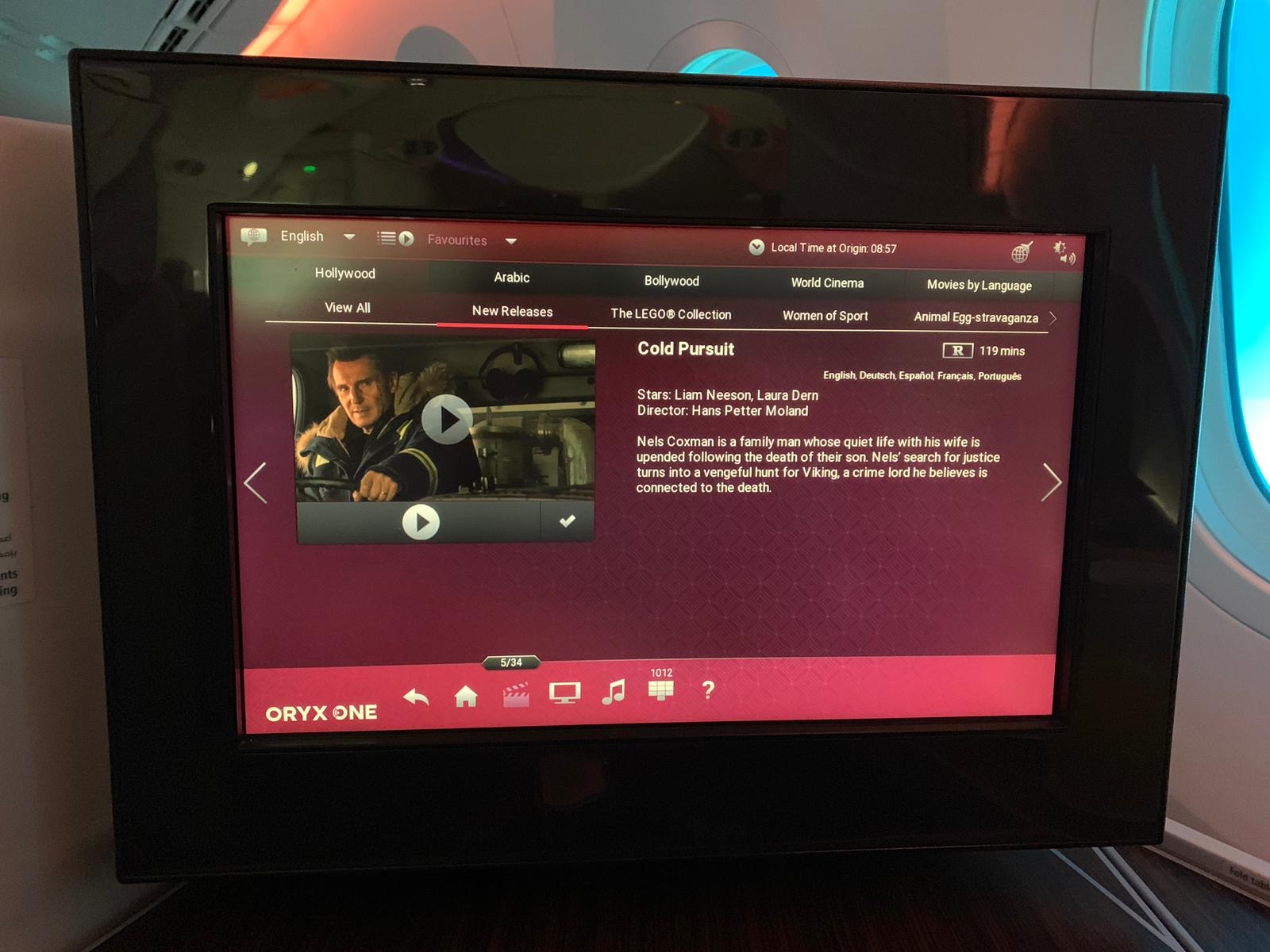 Speaking of choices, I definitely don’t regret the decision to fly Qatar Airways Business Class for my epic 28-hour journey. I felt refreshed when arriving, comfortable throughout and one leg of the flight was equipped with the Q Suite which is literally an incredibly private compartment all to yourself. The Business Class experience of Qatar Airways deserves the praise heaped on it and its clear why demand has increased for this young but successful airline in a short 3 years. It’s a superb airline that is establishing its brand with pride and I can’t wait to travel with them again.