Atlantis is a fictional island from the works of Plato, hosting the enemy’s naval power that surrounds and tries to control ancient Athens. The legend of Atlantis is a story about a moral, spiritual people who lived in a highly advanced, utopian civilization, but their greed and morally bankrupt behaviour led to immorality and the sinking of the island into the sea.

As the term evolved over generations, it simply came to represent an idyllic water kingdom, made popular by the Atlantis Paradise Island in the Bahamas. It was this themed water-island which inspired Sheik Mohammed bin Rashid Al Maktoum to create a casino-free version at the Palm Jumeirah and it certainly lives up to its name.

The Atlantis Water Park is the best water park in the Middle East and one I have visited many times with my family due to the sheer adventure of it. It’s an ideal place to go and spend an entire day with the kids at, with even the most water-resistant young ones finding something of interest.

Dubbed the Middle East’s “most Instagrammed hotel” by the resort itself, the Atlantis sits between the turquoise waters of the Arabian Gulf and reflects the picturesque Dubai skyline, seemingly organically existing on Palm Island.

it has at least half a dozen slides for the braver souls and it also has a wonderful children’s area which we affectionately labelled ‘The Bucket Area’ because of the many gigantic buckets that pour water at certain intervals leaving you absolutely soaking. 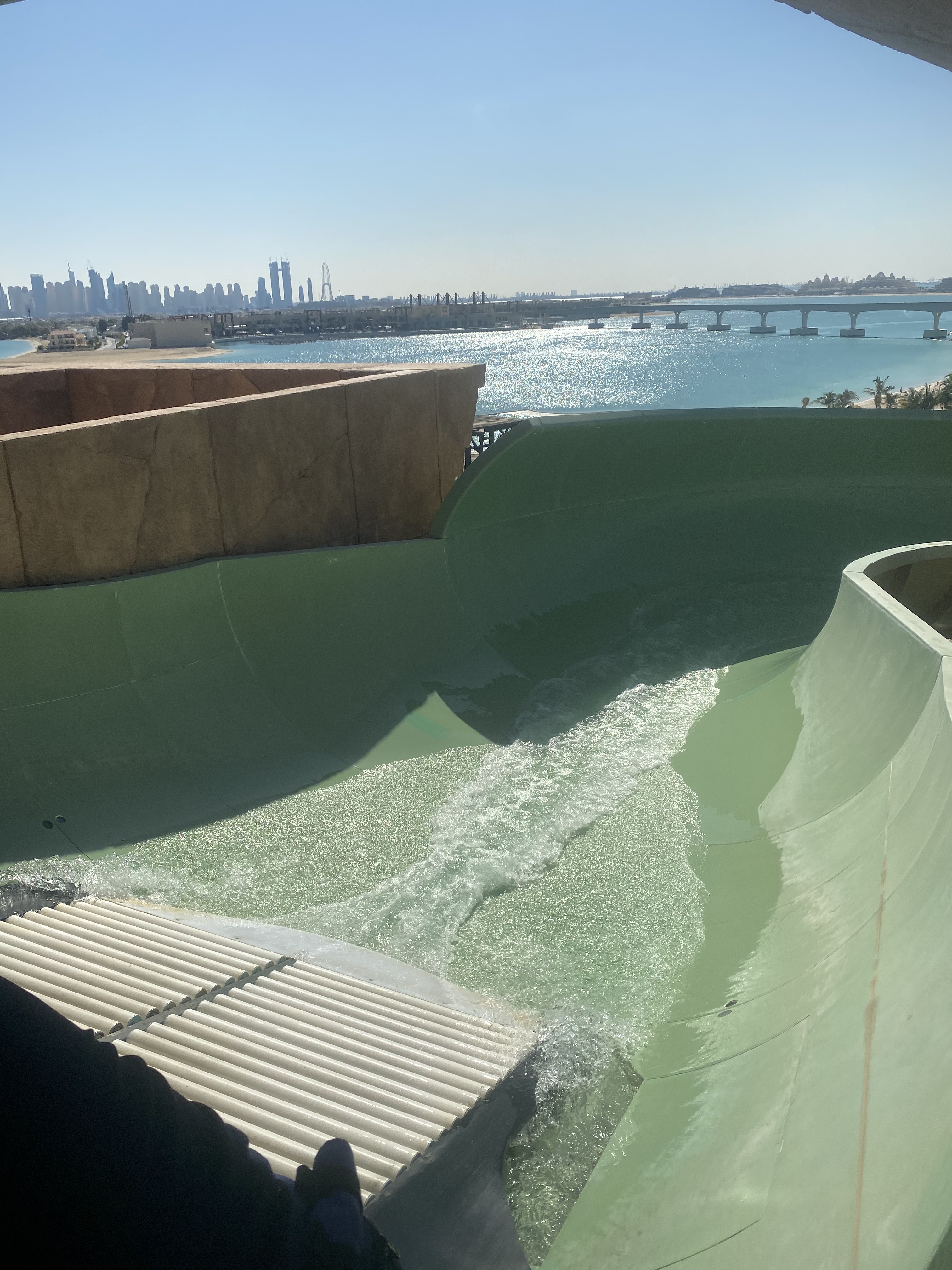 To access the water park, you need to walk through the hotel and depending on what time you arrive, there can often be long queues. We’d have a late breakfast and allow our stomachs enough time to settle so as not to get seasick in any way, arriving between 11am and 12, which meant we missed all the early morning eager punter queues.

For the kids there are water rings available, so you can have a single ring you can have a double ring for additional comfort and to keep them above water safely. There are a range of experiences on offer including the Aquaventure Waterpark, where there’s a junior section called Splasher’s Island, shark feeding experiences, the very long Lazy River and even a private beach area. The Rapid River is for an adrenalin rush as just a single lap takes 45 minutes in Dubai’s longest rapid river experience that outshines others. There’s diving, the gravity-defying 14m wall climb in Zoomerango and Shark Attack which sees you sailing on your ring through tubes immersed in shark infested waters. There are also opportunities to swim with dolphins, play with sea lions and explore the Lost Chambers Aquarium, home to over 65,000 marine animals and 21 different exhibit aquariums including a behind the scenes tour, Ambassador Lagoon and even the chance to relax completely with some underwater yoga.

There are many lifeguards throughout and especially in open water areas. They are there for the safety of patrons but also happy to say hi, have a friendly chat and even crack a few jokes. Beware though as some of their sense of humour can be a bit fishy! Whereas there are a lot of tourists from all around the world, it’s nice to be able to go to a water park where the majority of people are covered. Catering for all is not easy, but when you create an environment where Muslim women can have as much fun as they want and not have to worry about being stared at in their burqinis, helps maintain a family-friendly atmosphere.

They serve Halal food everywhere and there are plenty of options for everybody. So whenever you’re hungry for lunch or an early dinner, you can grab a bite from one of the stalls and pick up a delicious hot dog, fried chicken, pizza and shawarmas. 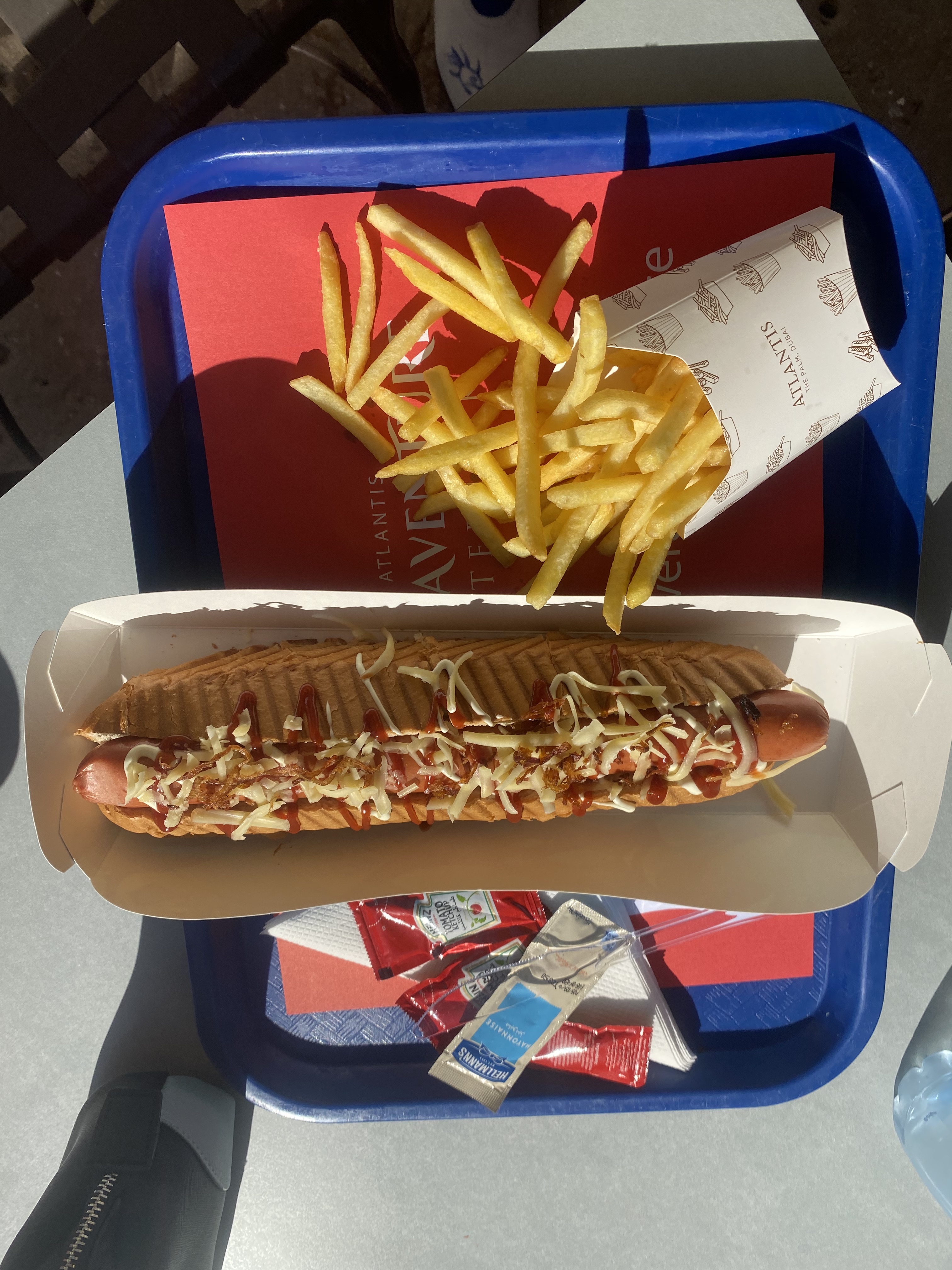 If you fancy an eat-in dining experience, then there’s Nobu, Hakkasan, a steak house and the exquisitely beautiful Lebanese restaurant Ayamna.

Be aware that the food is incredibly expensive. Even the hot dog and chicken tender meal (a kids chicken nugget meal) worked out to approximately £10 per person. After that, one scoop of ice cream worked out to cost approximately £9 which is the most expensive scoop I’ve eaten. I was tempted to share on scoop between all of us, but that would just be cruel given we were in Atlantis!

The other theme-park inherited aspect is that their staff take a lot of photographs of you and then if you want to purchase one picture it’s about £25. You can see all the photos taken of you and your family at the end when you scan your badge on exit and pick any you’d like to purchase.

To rent a towel you also have to pay again which is another £9. There are certain private areas which require you to pay for access, but these cost approximately £25 and have a sun bed and towel inside. You may be better off bringing your own towel and and keep a sharp eye out for an empty sun bed instead!

To maximise your cost-efficiency, buy the season pass for the Atlantis, which is what we did. We waited for the Black Friday sale and bought the season pass for £48 per person which gave us access to the largest water park for 3 months. Yes, that is an incredible 120 consecutive days of access for £48. Compared with the average cost of £60 per day, this works out astronomically cheaper. It’s also always worth logging onto the official Atlantis website and going to their water park section to see if they have any current offers like the January Sale they’ve got at the time of writing (Jan 2020). They’ll occasionally have sales on the season pass and signing up to their mailing list will also keep you updated on special offers. The hotel itself is also fantastic with an amazing breakfast spread as well as direct access to the water park, so it’s worth considering what saves you time, money and maximises your time in Atlantis by planning ahead.

Atlantis Water Park is a perfect addition to any trip to the Palm in Dubai. It puts the king in water kingdom with a majestic and wonderful experience that will leave you breathless and dying to explore it all. From a sunken city in the Lost Chambers to state of the art water slides, coasters and a white water rafting ride that takes you throughout the park, there is something for everyone in the family at Atlantis.

The only problem is that with a water park this good, the kids will want to return every year so be prepared for an experience that you’ll long to live again and again.